Every Moment is a New Beginning – Part 1 (audio)

If we are unconditionally present, each moment is a new opportunity.
If you forget to be present, just have a little laugh and start again. 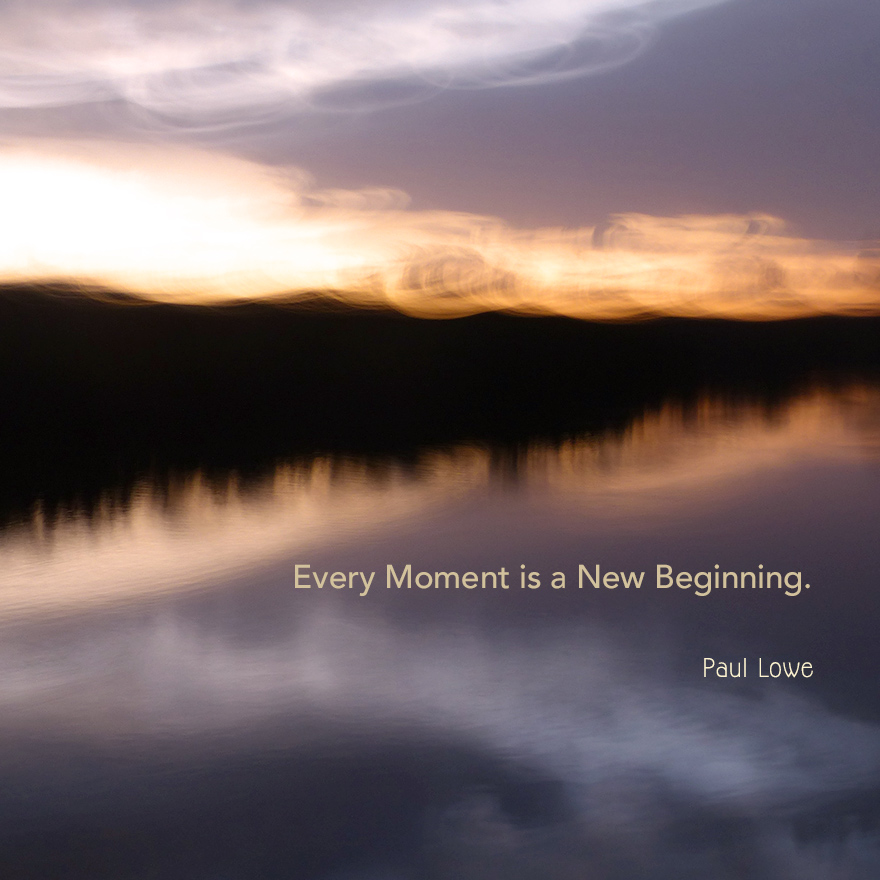 Kira:
I was thinking because it’s New Years Eve as we’re sitting here. Generally, at least for me and I think it is true for many people, it’s a time of reflecting on the year that’s been, and reflecting perhaps on the wideness of the year ahead. But I think it’s also a time when some people can get a bit pressured with themselves and what they should do for the next year as well. Just perhaps speaking to something about what … if we look in the outlook of a fresh start, and you’ve done so many fresh starts in your life.

Paul:
So what pops up is, when you said about how people are with the New Year. So, I looked at, how am I with the New Year. And I don’t really look at the past, or what’s going to happen in the future. That doesn’t happen. What does happen is, is there anything to clear up? And then, I suppose it’s sentimental or debate, but it is, I like to be as clear as possible for the New Year. But at the same time as I say New Year, I don’t really have a sense of a New Year, because to me… I was going to say, every day is new, but it isn’t even every day; it’s almost every moment is fresh. It’s… It starts now.

I suppose my mind’s saying something different, but I’m not in touch with it. It’s…. The past is very vague. And when you ask questions about it, it comes into focus. And something comes to say about it, and then it fades again. And then, when you talk about the future, I really don’t see anything. It’s as though there isn’t a future. I suppose we’re coming to say, the now is so strong to me now, that’s all there is.

And in the now can be, “Oh, I’d like to get that fixed.” and a little bit of sentimentality goes with that, “I’d like to get that fixed to start the New Year fresh.” It’s not very big. There is always a feeling is … it’s going to be whatever it is going to be. And then my reminder is, to keep being with the way it is, which includes anything that’s hanging from the past, anything that projects in the future, but there’s no energy around. It is this bird singing, these cattle making their noise, this comfortable chair I’m sitting in. So it keeps coming back to…. I know when I say this, it doesn’t register to most people, but there is only this moment. That’s all there ever is.

And if you’re engaged in regrets from the past or hopes for the future, you’re not here. And it’s here that creates what you think is your future. If you’re not here, you’re likely to miss something that’s going to create a consequence in what you call the future. The more present here … and now … and being with what is … as unconditionally as poss…, the smoother is the future, the future just unfolds. But if you’re busy thinking about something, you overlook something, that has a consequence in what’s called the future.

So it’s the present … and being with it … as it is … that helps everything to flow … smoothly. And when I say that, I think sometimes, we turn the water tap on and it doesn’t … the water doesn’t come out. Something’s happened to the pump, and then goes, “Ohhh, that means, I’ve got to get this person or this person or I’ve got to lift the pump out or I’ve got …” and there I am going through stuff that’s not relevant. What’s relevant? “Ah, so the pump isn’t working, now do I call the plumber? Do I call a friend?” Just take care of it.

And then, I come back to my cliché button line, come back to the basis that I’ve come back to for many, many, many years. In fact, I think it was part of a transformation and coming back to, “So now what?” And in there, built in, folded up is, “What’s the worst that can happen?” And then comes, “Oh well, it’s not so bad.” And then suddenly like now, the cattle stopped, everything’s gone still, “Oh. Well, we’ll take it from here.”

So I think this little fall back line is, “What’s the worst that can happen?” … puts everything into perspective. Of course, as I say that, I think about all the tragedies that are happening at the moment, bush fires at one end of the country, major floods in another, that’s just in Australia.

And then, what’s going on in the rest of the world, all this stuff going on. And I’ve always come back to is, yeah that’s it, “So what’s the worst that could happen?” It’s a…. It’s always worked out, and it’ll work out, if we’re here. But if we contract, and we go to all the things that’s … unpleasant from the past, and project them into things that could happen, we miss what’s appropriate now.

Just keep coming back to now. Just being here and then things unfold, ‘cause, when you’re contracted, you…yeah, you see things through the antiquity of the mind. And when you open up, “Alright, so this is happening. Let’s just assume, let’s just play that there’s something here for me, that this happening is an opportunity for me in some way.” And with that opening up … all sorts of things … even the phone can ring. And somebody can ring up and say, “I’ve got a spare day today, is there anything that you want doing?” Just that opening up … and we’ve talked about this before, it has actually happened many times. Somebody in the group has had a breakthrough with their mother, and there’re getting a phone call from the mother to say, “I’ve suddenly realized.” We are all connected. We’re all affecting each other.

Then I come to, what’s the practical? What can you do? Nothing, except be here … and just see how things are. And when I say, “See how things are.” I include … if you’re upset. I include that, “Yeah, that’s part of what’s happening.” I include, if you got any negative projections that could be ha…yeah include that. Include everything, but don’t give it any energy. Don’t make it significant. A light possibility, but we don’t know. We don’t know, and we really don’t know.

And built in is something that I consider, ’cause judgemental of course, ugly … and that is: competitiveness. It is so ugly. If that doesn’t resonate with you, watch a tennis match, an international tennis match, and look at the expression on the face of the person that’s just won the match. It’s usually ugly. “Oh yes, I won!” And it’s against the opponent. Then they shake hands, that’s not about shaking hands. The Olympics are one of the most ugliest things on the planet. It divides. It divides countries into…. And then, in the countries it divides, it divides, it divides. It’s that division … that I say, appears ugly, but it’s our pain. It’s our pain.

As soon as I say that, I keep thinking, often pops in, of aboriginal people. They have something. And the people that are closest to the land have something, and you can even see it. If you go and visit your friend in the country when you’ve been living in a high rise or in town, there’s a whole different frequency.

But people like aboriginal people, and people – I don’t know what we call them these days – but people who live close to their origins, they have a level of peace. They have a level of something. And that’s what you often get with wild animals, if you can get close to a wild animal. Not one that’s kept in a cage, ‘cause they get neurotic, but a wild animal like when the wallabies come up close here, or the Echidnas or…. They come up. They’re on the alert. There are predators. They’re on the alert and yet there’s something … deep … sweet … gentle … and they’re not separate from where they are. They’re part of where they are. And we all have that, and we’ve forgotten.

We get – so we’re coming back to the moment again – we get caught up, “Oh that’s right, last time I did this. This went wrong.” So what’s going to happen in the future? Past is finished, if the more in the presence you are, the more you learn. So when it becomes the past, you’ve got that experience built into you.

And it’s my experience, the more you’re in the present, the more you’re open, that there may be something there that you’re not automatically seeing, the easier, the sweeter things unfold in what we call the future. And it’s all based on how unconditionally, gratefully, present we are in each moment.