Every time you get annoyed with someone’s behaviour, it is a part you are avoiding in yourself.
Every single time! 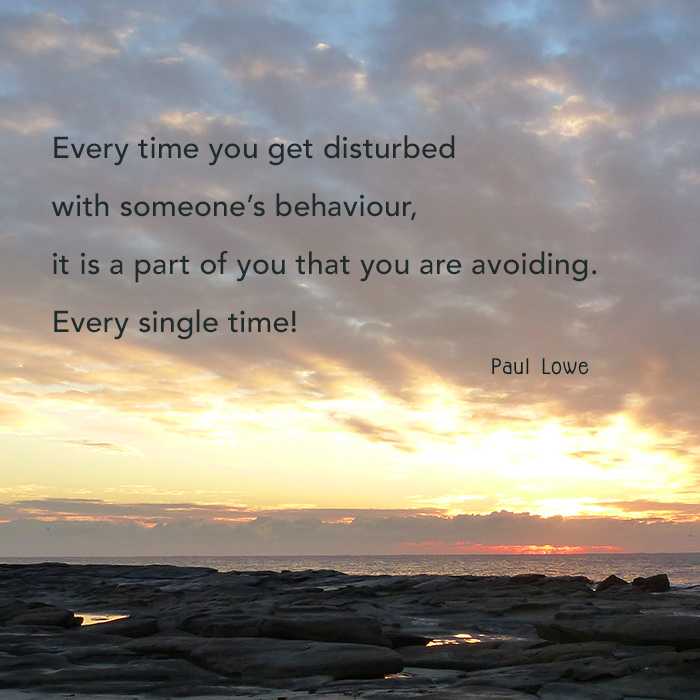 A few different topics have come up recently, and I’ll see how many I can remember to chat about. One thing to start off with is to say, the noise you can hear in the background are insects, cicadas and frogs, and things. So that hissing noise in the background, that’s the aliveness of nature.

Several people have been saying that they’re noticing more about other people, things they don’t like. And as we said often, and it’s now a technique with many people to say, whenever you’re uncomfortable about a behavior in another person, or you judge it, or you get upset about it, Stop! You’ve just been given a gift, because every time you get upset at another person, it’s something you’re attempting to avoid in yourself … every … single … time. And if you stop, forget the other person. Just stop and take a look, “What is it about that person I really don’t like?” And then even if it isn’t obvious, assume that you have that place in you, that you’re doing your very best to avoid.

Try this. Next time you get annoyed, you get upset, you get angry and disturbed about somebody’s behavior, what they’ve said, what they’ve done, how they are. Stop! And find that place in you. And then stay with it, and with it, and with it. And instead of going half way down the well, it gets worse. Stay with it! And it’ll go down, and down, and down. And it’ll hit the bottom. Not comfortable. And when it does, you will release yourself. You will float up. It’s finished. It’s over.

Not that it will ever go away, but now it will no longer control you. Now you will see it, and you go, “Ahhh, there it is.” And when you do that, you’ll see that’s not you, that’s behavior. And that’s behavior you’ve picked up somewhere, usually from your parents, or your brothers and sisters. You’ve picked it up, it’s not yours. Actually, nothing is yours. It belongs to your behavior. It belongs to what’s called ‘the ego’, or…. That’s not the essential you.

And if you stop when that process happens, eventually there’s a [finger snap], and you’re out. And suddenly you realize, you’re out and watching what you used to call ‘yourself’ behaving that way. And you’ll realize there’s been a switch. And that switch is, you’ve disconnected, you are no longer identifying with the behavior that you’ve been calling ‘you’, and you’re now the something else. Don’t try and give a name to it, ’cause it doesn’t have a name. Just look and see.

And then do this. You see, let’s imagine your best friend, your very, very best closest friend, is in some sort of trouble. You feel for them, don’t you? Let’s say, they got stuck in their anger, or stuck in some resentment. If you’re really close, you don’t get angry at them, you feel for them. Now do the same with you. You’re the something else looking back at this behavior. Feel them, be with them, empathize with them, and you’ll find love. Love.

And then, when you’ve got that love for the behavior that you got stuck with, the love for the person that’s stuck in that, or has been stuck in it. As you start to accept, and be, and allow with that place in yourself, your whole world changes, because you’ll find that happens in other people. You look at them, you see them doing exactly the same thing that used to really annoy you, and suddenly you’re not only not annoyed, you’re caring for this person. You’re looking for what you can say, or what you can do, to help them to go through the process that you’ve just gone through, and set yourself free. Set your-self free.

It does usually get worse, before it gets better. You stay with it, and you will set yourself free. And then this is what happens. You’ve done that, and another one comes up. So you do the same thing. And then usually the mind says, “Oh, this will go on forever, one thing after another.” No it doesn’t. After you’ve done it a few times, click, and the whole lot’s gone. As I say, not completely gone, it’s still in the system somewhere. It’s still lurking around in some muscles, or somewhere. But it’ll go. It’ll start to leave.

And then you feel something which we will call ‘love’, but it’s not the love that you’ve experienced before. It’s not the love of another person, because something magic happens. Now just listen gently ’cause I know it sounds very strange, but suddenly you realize, there isn’t another person. Now, just listen! I know, the mind says, “It’s got to be this or that.” No. It’s not either or. Suddenly, you realize that whatever this person is going through, in a way, includes you, and you include them. And you start to get this…, it’s not even a feeling, it’s a sensation.

If you can hear those crickets in the background … that little buzzing sound, you’ll find you got it on the inside as well. You see, because that buzzing isn’t on the outside. What’s happening is, there is a frequency happening. There are atoms and molecules and little things, all buzzing. But they come silently through the air. And your ears have little hairs in there, and little bits of skin, and things, and electrical contacts, and they pick up this vibration. And they pass this vibration to another part of your brain that turns it into sound. If you tune into that sound, that buzzing … you might feel it in the air.

Feel it … ’cause it’s a frequency. It’s a vibration. It’s actually rippling through the air. The air is still, absolutely still, but it ripples. The same as the ocean. Waves … are not the movement of water, they’re the movement of energy going through the waves. It lifts the water up, and then drops it down behind. And it looks like a wave. It’s a ripple.

So what you’re calling ‘sound’ now, is actually a ripple going through the air, and being translated by your brain into sound. Now just imagine because this is so. The whole of the universe is full of these ripples, all different ripples. And not just from the ones you can hear. As somebody walks past you in the street, you are picking up their activity in their brain. You’re picking that up. You’re being affected by it. Everything that happens on the planet is affecting you now.