Not knowing is the most intimate. 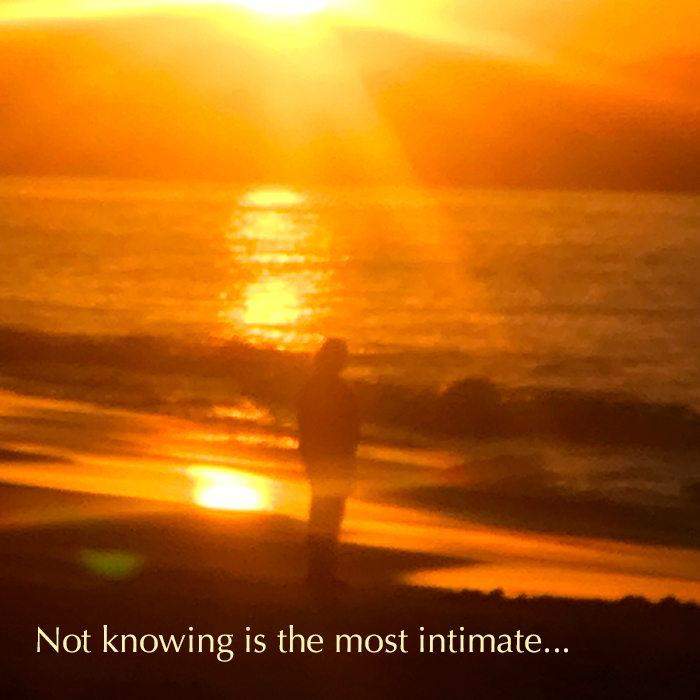 I think, I talked about this recently. When I look at being present and being conscious and being available, there seems to be processes of going and going and going, until it gets to a point where, there’s not only no words, but there’s no way of looking at what’s happening. And then, when I come back to being more practical in the moment, I take a look and say, “Well, where have I read about that, heard about that?” And it goes back to the Far East, to the wise people Lao Tzu and Buddha and Mahavira, it goes back.

Then, what I am remembering them saying is – and then again there’s no real words for it – that there is a state, where there’s a realization, which means it feels very tangible, that there is a something else – which they call the fifth. And then, at the sixth, they call the sixth, there is this feeling that, I am included in this something else, but just the very I puts a slight separation.

And then, what they say is at the seventh – and some of them say, the eighth – then that “I”, that “self” dissolves or – yeah, there’s no word – is the one. There is only one. So there’s nothing there to say, “There is one.” It is the one. And they’ve all tried to talk about it. Lao Tzu, “If the truth is said, it’s not the truth. The truth cannot be said.” And then, they give it names; the Kingdom of God, the TAO, the Way, … that there is something that can’t be explained.

And it’s sort of academic, in a way…
I keep coming back: here we are, now, being available.
And again the Zen saying, “Not knowing is the most intimate.”

One Response to Stages of Consciousness (audio)